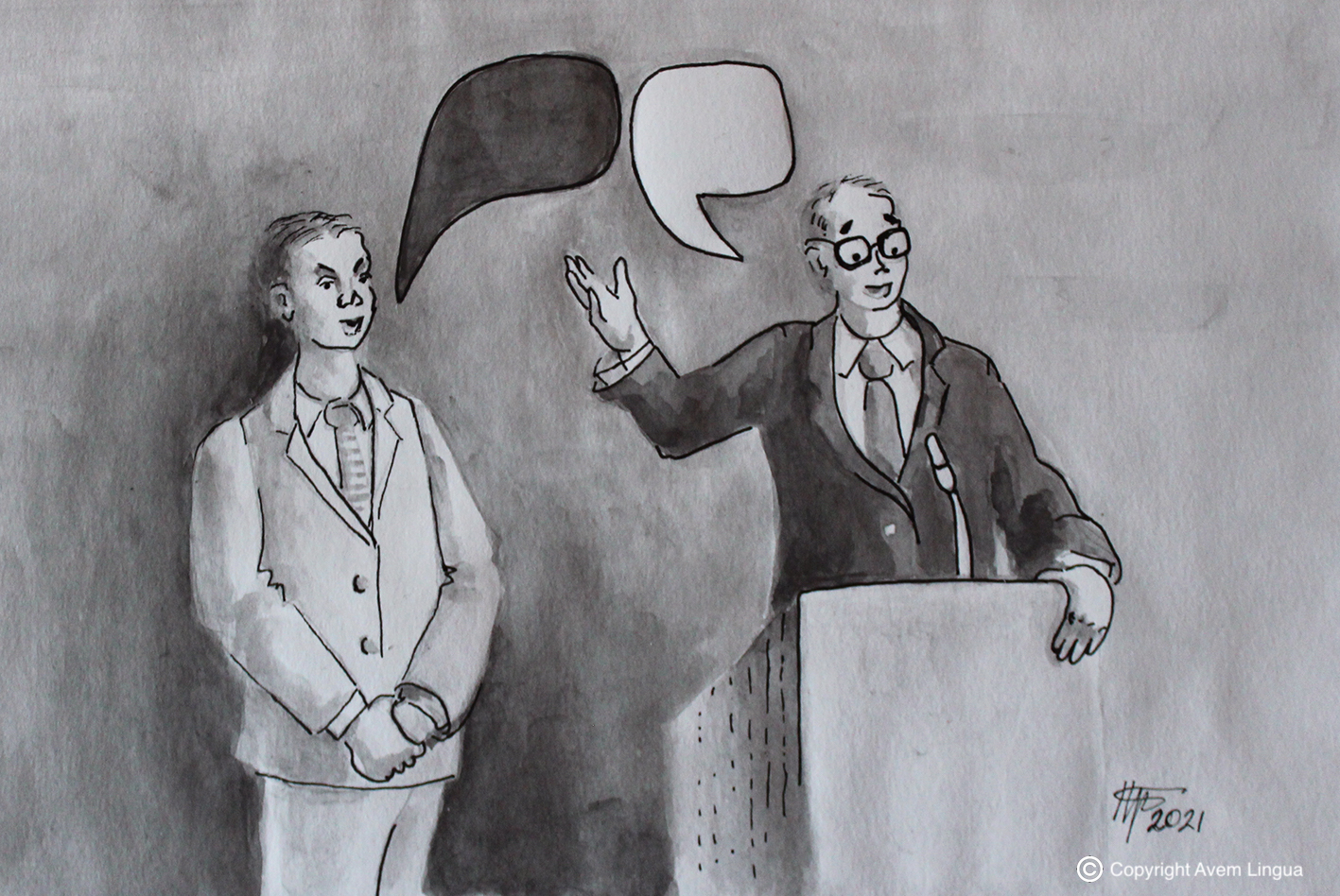 It is common for people to think that interpreter should master his/her working languages perfectly. This idea can cause quite a lot of stress for language specialists. In his book Undiplomatic Activities (2007), Richard Woolcott, who served as Secretary of the Department of Foreign Affairs and Trade of Australia for four years (1988–1992), described some comical and awkward incidents regarding interpreting. Before the book was even published, the French magazine Bulletin wrote an article of it with quotations about interpreting.

Woolcott reminisces his work in Australian Embassy in Indonesia:
Woolcott was visiting the city of Palembang, located in the southern part of the country, and said in his greeting in English: ”Ladies and gentlemen, on behalf of my wife and myself, I want to say how delighted we are to be in Palembang.” Once interpreted, the same sentence turned out quite peculiar and had a different meaning: ”Ladies and gentlemen, on top of my wife, I am delighted to be in Palembang.”

Woolcotts´s memoirs also feature another interpreting incident which was related to Bob Hawke, the former Prime Minister of Australia, who served from 1983 to 1991. Once the Prime Minister confused his Japanеse audience as well as his interpreters when his answer to the irritating questions of officials was the following: ”I am not here to play funny buggers.” The meaning of this Australian colloquial phrase is: ”I am not here to make jokes with you.” As Woolcott wrote in his book: ”For Japanese interpreters, however, this was a real problem. They went into a huddle to consult on the best way to render 'funny buggers' into Japanese.” After a short pause, the interpreter said on behalf of Hawke: ”I am not here to play laughing homosexuals with you.”

Woоlcott says it is sometimes better for interpreters to remember that ”silence is golden”. Staying silent and leaving something unsaid helps the interpreter to avoid awkward incidents and at the same time do his/her work in a professional manner. As an example, Woolcott points out an episode that happened to one Asian minister at a banquet in Seoul. The minister in question decided to entertain his audience by telling a long joke. ”The Korean interpreter was lost but did not show it. He uttered a few sentences and the audience laughed and applauded,” Woolcott wrote in his book. Later, the interpreter told what really made people laugh: ”Frankly, minister, I did not understand your joke so I said in Korean that the minister has told his obligatory joke, would you all please laugh heartily and applaud.”

All Woolcott’s stories are related to diplomatic occasions where usually only specialists, who are considered to be experienced, are allowed to interpret. But even they sometimes end up having inaccuracies in their interpreting, making white become black and vice versa. With this in mind, what is there to say about young interpreters who are just learning to master this challenging profession? Imagination and dedication often help even seasoned professionals in difficult situations. An interpreter, who asks the speaker about the meaning of his/her speech, might look like an amateur at first but with this acquired additional information, the interpreter will perform successfully at his/her job. Interpretation comes first, image is secondary!